This is a wide-ranging conference, reflecting the fact that early modern Latin drama was a pivotal form for the development of educational practice and literary composition right across Europe, from Elizabethan Oxbridge to the continental Jesuit colleges. Culturally conspicuous, often ideologically engaged, original Latin plays were the pedagogical lifeblood of Renaissance schools, colleges, academies and universities. The conference will take place at Magdalen College, Oxford and registration is available via the Society for Neo-Latin Studies website: SNLS. For full details of the conference programme: CONFERENCE PROGRAMME 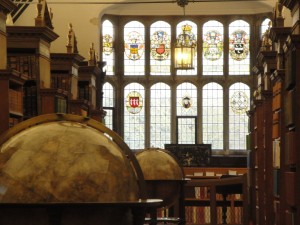 , James McBain, and Elizabeth Sandis have been invited to present at the conference, and their papers will be complemented by an EDOX production specially commissioned for the event. This performance, entitled Diaries of a Christmas Prince, will take place in the Old Library at St John’s College (pictured right) and dramatises the evidence of SJC MS 52, a manuscript more generally known as ‘The Christmas Prince’. This unique document records the struggles and successes of students at St John’s College, Oxford as they attempt to stage their own compositions for the festive season in 1607/8: eight tragedies and comedies in total (five in Latin and three in English). 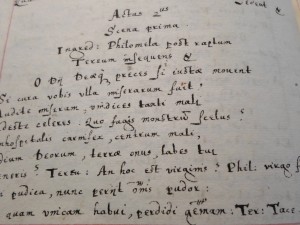 Sandis has translated and adapted the material from the The Christmas Prince manuscript to allow audiences to enjoy a selection of highlights from this lengthy document. Dutton will direct a production of the adaptation, with a cast drawn from current St John’s College students. The insights offered by the Christmas Prince manuscript make it of crucial significance to the history of university drama as a whole. A special exhibition of the Prince (together with other drama-related manuscripts) will be hosted by St John’s College Library (pictured), enabling conference delegates to view the historical document and the EDOX dramatisation of it in tandem. 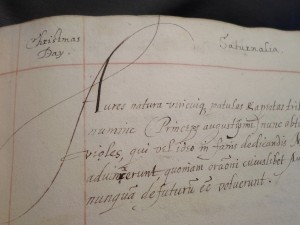 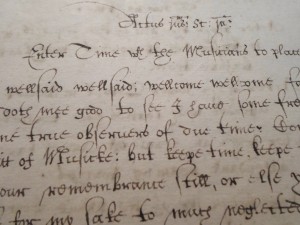 All images of SJC MS 52 reproduced by kind permission of the President and Fellows of St John’s College, Oxford