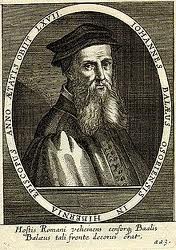 EDOX collaborators James McBain and Elisabeth Dutton have received funding, from the Magdalen Annual Fund and from the John Fell Fund of Oxford University Press, to fund a pilot project, EDOX Magdalen, including: performances of John Bale’s Three Laws, a film about the play in relation to the spaces and history of Oxford, and an Occasional Paper on Early Drama at Magdalen. The members of the EDOX team working on the Three Laws film project include director Maria Sachiko Cecire (Bard College), who works on medieval afterlives in contemporary culture, and Jenny Sager, whose research explores early modern drama through the language of film.

One of many good reasons for choosing to launch EDOX with a consideration of John Bale’s Three Laws at Magdalen is, ironically, that we do not know for sure that the play was actually performed there. The REED editors draw attention to the fact that account records for 1560/61 include a payment of 3 shillings and 4 pence to one “joynere (William Joiner) for painting the names of the heresies for the show which the choirmaster produced” and our attention is then led to a similar draft entry, which identifies the performance as “spectaculo baulino”. And it is certainly seductive to agree that the references might well be to Bale’s play here.  But we should perhaps be extra cautious, given that the Informator (the Choirmaster) was a man named Richard Ball, often spelled with a ‘u’, at this time. We know similarly that the President of Magdalen, Laurence Humfrey, wrote to his friend and erstwhile fellow exile John Foxe in late 1561 to ask permission for the college to perform his Christus Triumphans, a request which we know about from Foxe’s extant reply. But, again, we have no evidence at all of an actual performance at the College.

Such tantalizing references might be initially frustrating, but they provide hugely fertile ground for testing ideas about the plays and their possible host institutions. In seeking to flesh out the bones of REED’s skeleton, and understand the character, methodology and function of early modern academic drama, EDOX will adopt a pragmatically speculative approach. So, for example, we might ask to what degree can we form judgments from intentions alone? Does the fact that Humfrey wished to have Foxe’s play performed allow us to credibly accord him a particular understanding of the potential of drama to influence or maintain its possible audience? Might Humfrey, a former Magdalen Fellow who became Regius Professor of Divinity in the year of the possible production of Three Laws, have exercised a similar influence upon the choice of play then too? And, assuming that either Three Laws or a markedly similar play was produced at Magdalen in 1560/1, why might it have been chosen? Our research has established a number of reasons for a possible performance and all will soon be revealed in an article by James McBain in Medieval English Theatre.

This film, directed by Maria Sachiko Cecire, brings Bale’s play to life in contemporary Oxfordshire. It follows student actor Alex Mills as he moves around the city of Oxford, speaking with experts and taking part in scenes from Three Laws as the allegorical vice Infidelity. 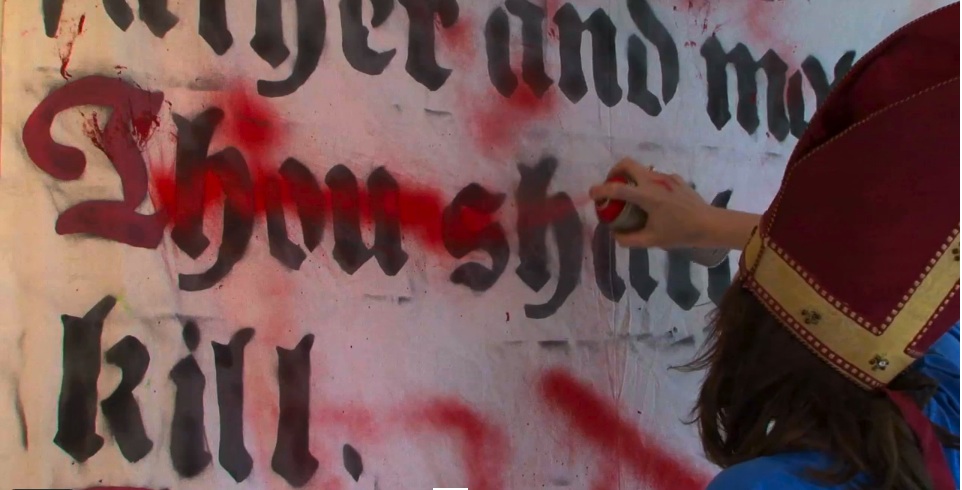 These scenes situate Catholic vices in present-day city and university spaces that speak to the religious tensions of Bale’s time. The gleeful machinations of Infidelity, Sodomy, and Idolatry play out in the ruins of Godstow Abbey, which in its time was rumoured to be a site of sexual indecency; Ambition and Avarice help Infidelity deface the Ten Commandments with colorful paints in a modern-day artists’ studio; and St. Mary’s Church on the High Street serves as the setting for Pseudodoctrine and Hypocrisy to (again with the help of Infidelity) try, condemn, and martyr Evangelium.

Three Laws in Oxford considers the connections and disjunctions between the historicised past and the lived present, between archaic texts and contemporary experience. Oxford community leaders and scholars help to contextualize and explore some of these points of contact, leaving Alex to make the ultimate leap across time when he delivers the play’s patriotic final speech in a very public arena.

Cecire also co-directed Magnyfycence: Staging Medieval Drama with Mike LaRocco in 2010. Supported in part in part by the UK Arts & Humanities Research Council, this film uses cinematic techniques to interact creatively with Elisabeth Dutton’s staging of John Skelton’s 16th c. play in Hampton Court Palace. The full film can be seen below; for stills and more information on this project, see the Staging the Henrician Court page. Cecire’s article about the film, ‘Magnyfycence Onscreen: Documentary Film and Media Translation,’ will appear in an upcoming volume of Medieval English Theatre.